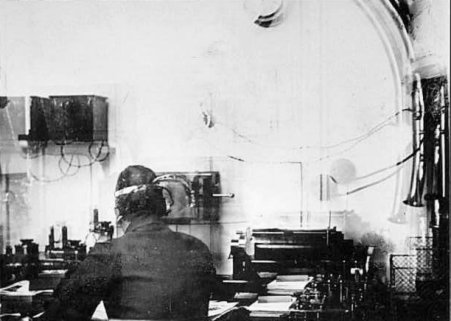 This is the only picture ever taken of the Marconi Radio Room aboard the Titanic Luxury Liner.  Harold Bride (in the picture above) was the assistant radio operator. John 'Jack' Phillips died in the sinking, and his body was never recovered.

Harold Bride, after being rescued by the Carpathia from the icy waters of the North Atlantic Ocean, worked as a radio operator aboard the rescue ship until it docked in New York on April 15, 1912. He suffered from frostbite for a short while.

Metallurgical Researchers later found that there was a shortage of high quality rivets and experienced riveters when the TITANIC was built.  They found slag (impurities) among the rivets recovered from the shipyard. About 3,000,000 rivets were used to build the TITANIC. The researchers estimated that an unknown quantity of these rivets had only 50% of the 9,000kg sheer strength specified by the design engineers.